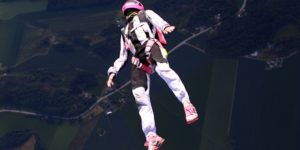 Erin had successfully completed more than one hundred skydives before her fateful jump. On that day, a small airplane took her and five others to four thousand metres. One after another, they leapt through the open door of the airplane.

“You gonna jump?” The pilot yelled over the sound of the rushing wind.

She stood at the edge of the open doorway. She looked down at the farmland below. From up here, it looked like a patchwork quilt of green and yellow, partially obscured by clouds. She took a deep breath and leapt into the sky.

Her body spun in the air for a few moments that felt like an eternity. She managed to right herself, and lay on her back, resting on the cushion of air. The small plane was now far above her. She waved at the pilot, but couldn’t see if he waved back.

She rolled back onto her stomach so that she could watch the earth zoom up to meet her. Wind rushed against her ears. Far below her, the other skydivers fell to the ground, some drifting in the safety of their blue parachutes; others were still in freefall. Another parachute opened below her.

She glanced at the altimeter on her wrist: one thousand metres. Time to open her parachute. Nothing happened. Her heart raced. Eight hundred metres. Where was her emergency chute? Six hundred metres.

Before Erin had the misfortune of crashing into the hard ground, she stopped moving. She didn’t crash, or come to a jolting stop, she just wasn’t falling anymore. She was hovering in the air at just above four hundred metres.

It took an entire day for them to find her. The search had started on the ground, naturally, but she had never made it there. Everyone was relieved to discover that she was alive, but no one had any idea how to get her down. Her body was firmly fixed in midair.

The news helicopters were the first to arrive. They circled her, taking endless hours of footage of her body, miraculously suspended hundreds of metres from certain death. Reporters—armed with megaphones to compete with the noise of the whirring blades—tried to interview her. They leaned perilously through the open doors of the helicopters, competing for a career-making interview.

“Are you concerned that you will start to fall again?”

“I have to ask, why would you jump out of a perfectly good airplane?”

“What do you do when you have to pee?”

She had nothing to say to any of them.

Days passed, and still, she remained in the air, hovering and un-rescued. She was cold and more than a little bit tired, but her other basic needs were being taken care of. Dozens of companies had donated food and water to her cause, taking advantage of an unprecedented opportunity for product placement.

On the fourth day, her husband was allowed to visit her. He had hitched a ride in one of the news helicopters. They’d even given him his own megaphone.

“I can’t hear you.” One of the journalists inside the helicopter tapped his shoulder, and spoke directly into his ear. He placed a second megaphone in her husband’s hand.

“Honey, I’m going to throw you a megaphone.”

He counted backwards from three, then tossed the megaphone as hard as he could toward Erin. She strained her arm to reach it, but it only brushed the tips of her fingers before it plummeted to the ground below. She watched it spin through the air until it was out of sight.

On the ground below, scientists discussed possible causes for Erin’s predicament. One scientist thought that she’d gotten caught up in a very firm cloud, though he couldn’t quite explain how colliding with this cloud hadn’t killed her. Another scientist blamed an invisible force field. Another claimed that the world was sharing a delusion, and that no one named Erin Meyer had ever existed, let alone skydived. Another scientist thought that cosmic glue was the likely culprit, and was eager to study Erin up close for signs of adhesive substances. One fringe scientist claimed that aliens were involved, though he couldn’t explain why.

No aliens came forward to claim responsibility for the event.

Once it became clear that she was neither going to give them an exclusive interview nor plummet to the ground any time soon, the news helicopters left. She was all alone, save for the small bird that had landed on her elbow. It didn’t talk much, so she didn’t mind the company.

The roar of a plane’s engine passed overhead, scaring off her new friend. Her blue wings faded into the distance, leaving Erin alone, once again.

Above her, a man’s voice yelled, but the words were unintelligible. She tried to turn her body to look upwards, but she was still hopelessly fused in place. She looked over her shoulder, and from the corner of her eye, she could see that she was in serious trouble. Above her, getting closer by the second, was a man in a blue jumpsuit. He was probably a reporter, she thought, desperate to get her story. At least he was dedicated, she gave him that.

He fell towards her at an incredible speed. Unable to get out of his way, she closed her eyes and braced herself for the possibility of impact.

“It worked!” The man yelled, slightly out of breath from the excitement.

“Alan?” She opened her eyes and saw the familiar face of her husband, a short distance away. “What the hell are you doing?”

“It’s nice to see you, too. I thought you could use some company up here in the cosmic glue.”

“It’s just a theory some of the scientists have.”

“Are they going to rescue us?”

He smiled, and reached for her hand. 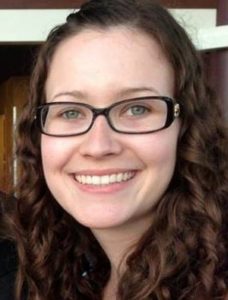 Jennifer Mitchell is a Canadian writer. Her work has appeared in Mad Scientist Journal and Fiction on the Web.