Why We Don’t Run Movie Reviews Any More 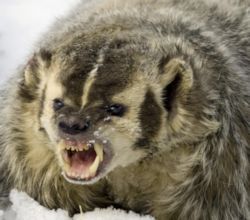 I think I have officially hit movie burnout. It was Date Night last night, so the Mrs. and I went out for dinner and a show. The show in question was the latest remake of The Magnificent Seven, for the very good reason that the Mrs. adores Chris Pratt and will watch anything in which he stars.

And maybe that’s the problem with this movie: Chris Pratt Overload. Or maybe that’s why I have so much trouble rebooting the Badger & Vole Review series: aside from the not insignificant challenge of talking Vole into doing it again, perhaps I’ve just plain seen too many movies. When I sat down to write this review, I suddenly developed a terrible sense of déjà vu, which led me to take a quick look at—yes, I could just take our 2013 review of The Lone Ranger, make a few substitutions, mainly replacing “Johnny Depp” with “Chris Pratt” and the “Transcontinental Railroad Corporation” with “Bartholomew Bogue Mining Company,” and fill in the rest from boilerplate.

Perhaps that’s the secret to being a successful movie reviewer: having the ability to choke down the same old dog food every day and write the same review over and over, and yet still be grateful that you’re being paid to watch movies instead of having to work at a real job.

Or perhaps I’m simply too old, too jaded, and have seen too many movies to properly appreciate this one for its own merits. So let’s cut to the catalog of faults.

• If you have a high regard for the 1960 version of The Magnificent Seven, skip this one. This version is only four minutes longer than the 1960 version, and yet it seems much longer, mostly because the filmmakers apparently decided to jettison all the character and plot development and concentrate on more, longer, and bloodier gunfights. The body-count in this one is right up there with Expendables 3.

• If you’re a fan of Blazing Saddles, skip this one, as otherwise you’ll find yourself muttering lines from Blazing Saddles while you watch; especially whenever Peter Sarsgaard is on-screen, playing chief villain Bartholomew Bogue as if he’s stopping just one thin notch short of channeling for the late Harvey Korman playing Hedley Lamarr. Remember, the threatened town in this one is Rose Creek, not Rock Ridge, and the oppressed workers are miners, not railroad track-layers. Big differences.

• If you’re a fan of the Marvel superhero movies, skip this one, as otherwise you’ll spend the movie looking for inadvertent cross-references to The Avengers and Guardians of the Galaxy—and finding them. Oh yes, you’ll find them.

• Finally, if you’ve ever had the misfortune of living through seven successive rewrites of the Wild Wild West script, each one worse than the one before, skip this one, as you’ll keep seeing bits of business and hearing lines of dialog that were rejected from different versions of that turkey. Which leads one to wonder: is this simply an unconscious side-effect of people in Hollywood only paying attention to each other’s work, or is there actually some sort of alien hive mind buried in the Hollywood hills and in control of the film industry?

But other than that: it’s a great movie. And Chris Pratt is charming and gets all the best lines. And it does star Denzel Washington, not Will Smith, which is a distinct plus.