Stellan slouched against the bar, hands cradling a shot glass as if he were warming an unhatched egg. For hours, he’d kept himself to himself, tipping back an assembly line of shot glasses, not bothering to look up long enough to notice anything beyond the increasing blur of wood grain on the counter-top. So when a stranger sidled up beside him and whispered “Hi” into his ear, his arms jerked and the contents of his glass doused his hands in whiskey.

“Sorry,” the stranger said. “I didn’t mean to frighten you.”

He looked up. Irritation painted a scowl on his face for both the interruption and the loss of four bucks worth of liquid apathy. But the moment he saw the stranger clearly, his expression shifted into wide-eyed awe. She wasn’t just hot; she was goddamn beautiful, with creamy skin, eyes the color of amethyst, and lips red as fresh-shed blood. And her body? The perfection of its curves would have made the greatest master sculptors of old weep and blush with envy.

“N-no tr-trouble,” he stuttered, averting his eyes, and she laughed—not like bells or music, but something in-between.

“You seem so sad. What’s the matter?” she asked.

Stellan pursed his lips, staring up at her with wet, red eyes. “My girlfriend left me today.”

“That’s too bad,” she said, the end word veering closer to a question.

“Yeah, I guess. We never got along that well, but that’s six years down the drain.”

Rasping music blasted through a jukebox’s torn speaker cone, the din of clinking glass and ardent chatter filling the silence between each song. Yet somehow, the lull in Stellan and the woman’s conversation felt as awkward as a pin-drop hush. While his shredded nerves set his leg bouncing, she bit her lip and cast a shy glance all around, as if waiting for him to make the second move. The longer he waited, the more her coy demeanor gave way to something more seductive.

“I’ll drive,” he joked, though neither of them laughed.

He threw back the last few drops of whiskey, fighting off the sudden urge to lick the bottom of the glass, and stumbled from the stool into her arms. She didn’t seem to mind, even wedged her hip into his waist to prop him up. They headed outside, huddled close, shielding their faces with their arms against the chilled winds of a midnight San Francisco. After stumbling a few blocks to Union Square, they ducked inside the Hilton and didn’t stop until she set him on her bed.

He wavered side to side, too dizzy to sit straight, too nervous not to fidget. His head hurt trying to work out a plan of what should happen next. Was he supposed to say something? Do something? Wait for a clearer invitation? He’d never met a strange new girl and brought her back to his place before, much less lived that scenario in reverse. She bypassed his hesitation by pushing him down against the sheets, eased herself onto the bed until she was straddling his legs.

A round of fondles and caresses. A quickening of heartbeats. Clothes disappeared and, before he knew it, he was in over his head, living out the rebounder’s greatest dream. Hours—or minutes, he was too drunk to tell for sure—passed before they collapsed beside each other, too sweaty and exhausted to share a word. She shifted. A sharp pain raked the side of his leg, but it didn’t matter, he didn’t care. He just gave himself to the comfort of his surroundings, the soft, warm glow of post-coital satisfaction easing him into sleep.

He woke, grinning like a fool. Earlier, he’d had his day mapped out: a drunken binge to dull the pain and then a sleepless night spent mopping tears up with his pillow. But now? The night had changed him for the better, had banished every trace of sadness nestled in his heart. He felt renewed, and it was all thanks to this stranger and her unexpected boon.

He turned to her, struggling to assemble the right words to express the depths of his appreciation. Only, morning light leaking through the curtains had worked a change as well. The woman’s eyes were still amethyst, but without their center pupils. Her lips were still red, her skin still smooth, but that perfect body he remembered from the night before? It was now green as a rose’s stem and twice as thorny.

He threw himself to the floor and scrambled to his feet.

She drew the blankets closer to her chin and said, “Please, let me explain.”

He didn’t bother to wait around and listen—and neither did his clothes. A flash of light erupted all around him and the next thing he knew, he was running down the hallway, through the lobby and into a brand new sun-drenched morning.

The trip back to the bar’s parking lot was a sobering affair. Cold air raked his skin like the raging ghost of sandpaper. Most onlookers seemed amused by his state of undress, if they even noticed him at all. Still, a few watched with unveiled contempt and one man even went so far as to mutter “pervert” as Stellan passed him by. There was only so much skin two hands and a wad of clothes could cover, but he tried his best to make them count.

While dressing in his car, his mind wandered back to that woman with the green-skinned body. Who was she, really? She wasn’t human—that he knew for certain—but then what else could she be? A phantasm? A succubus? An alien? And where did she come from? The longer he pondered it, the more a single question wormed its way up through the crowd of all his thoughts: a question whose answer seemed so obvious in hindsight, he cursed himself for not realizing it before. When all was said and done, did the “who,” “what,” and “where” really even matter?

Hell no, he thought and raced back to the Hilton in a manic sprint.

When he found her room again, he unleashed a series of flat-palm thumps upon her door.

“It’s me, Stellan. I’m sorry for how I acted earlier. Please, just open up.”

Ten minutes passed with no answer and he slumped to the floor, determined not to give up. She had to come out sometime, and even if it meant he had to sit there all day for a chance to set things right, he would do so gladly. He waited for hours, arms crossed, back pressed flat into the wall beside her doorway. But by the time the maid came by, the woman was already gone, her room so clean it might never have been used.

Stellan thought about the green woman who saved him from despair on the traffic-clogged drive home across the bay. By then, he was sure it had been a close encounter, but for what purpose he couldn’t fathom. He wondered what would have happened if he had stayed for the woman’s explanation. Was he the subject of some intergalactic experiment on interspecies love? Would she have taken him with her when she left the Earth behind? Or had it only been a one-night stand, the same as any other?

In any case, he wondered why all aliens didn’t study humanity the same way she had. If they did, maybe fewer people would fear the thought of a nighttime alien visitation. In the very least, they’d have no good reason to complain. He didn’t, and God as his witness, he never would. 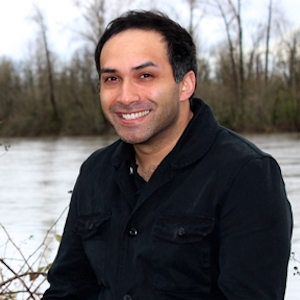 Samuel Marzioli is an Italian-Filipino author of mostly dark fiction. His work has appeared or is forthcoming in various publications, including The Best of Apex Magazine (2016), Shock Totem, Intergalactic Medicine Show, and Myriad Lands Vol. 2 (2016). You can find more information about his latest projects at : marzioli.blogspot.com

One Response to Fiction: “Midnight, San Francisco”
by Samuel Marzioli