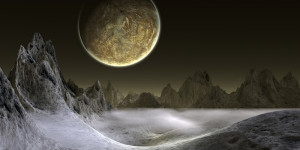 “Somebody probably though they were funny, calling this dump a sea.”

Bentley and Nguyen were surrounded by salt-laced sand. They stood in an ancient seabed of a moon orbiting a gas giant, the red-and-orange planet dominating the dark sky.

“This old mare ain’t what she used to be.” Bentley turned back to the disabled ATV. A minivacuum labored to clear sand from the wheel housing.

Weird stuff, this sand. Pale gray mottled white with salt, and waxy. As Nguyen stared, a trick of the light made the salt chunks seem to move, like maggots squirming.

“I’ll be glad to get out of this suit. I itch.” Bentley shut off the minivacuum, resealed the wheel housing, and tried the ignition. A harsh grinding gave way to a resounding snap. “Damn it!”

Curse Bentley for saying he itched. Now Nguyen itched too. Unable to scratch, she thumped her helmet.

Something shook loose from her hair…and squirmed on her shoulders.

Kneeling by the wheel housing again, Bentley banged a gloved hand on his helmet. “I swear, it’s like I’m getting eaten up by mosquitoes.”

Chunks of white salt and waxy pale gray sand coated their envirosuits. White salt clumps, squirming like maggots. A trick of the light.

He turned to her.

Visible through his faceplate, chunky white parasites squirmed over Bentley’s face. One slithered into his nose as Nguyen screamed.

Molly N. Moss is the alias of a swashbuckling adventuress from the 43rd century, trapped in our 21st century by a tragic time travel accident. She doesn’t like to talk about that. As few of her futuristic skills are useful in our time, she now writes science fiction, fantasy, and horror. Feel free to follow her progress at facebook.com/MollyNMoss.

2 Responses to Fiction: “This Old Mare” by Molly N. Moss